Animal Farm (2020)
2D Animation and Motion Graphic
Adobe After Effects, Adobe Photoshop
Concept
Based on George Orwell’s Animal Farm (1945), I created this Motion Graphics animation to re-tell the story in an exciting visual medium while reinforcing the powerful metaphoric narrative of the book.
Animal Farm uses anthropomorphism to tell the story of the Russian Revolution. . The book starts with talk of a revolution against the farmers using socialist ideologies (labelled animalism for the sake of the book). The movement is led by pigs who then get a taste of power and slowly become authoritative dictators and oppress the rest of the farm animals, rejecting the original philosophy of “animalism”. This is reminiscent of Stalinism’s betrayal of the original ideas put forward in the socialist revolution.
Like the original intention of Gorge Orwell’s Animal Farm, my animation is targeted at the general public to enforce the moral that power corrupts. However, unlike Orwell’s audience in 1945, we are not living within the context of a recently ended World War 2 and amidst the duration of Stalinism. But although the context is different, the themes of corruption and betrayal endures. These themes can be applied to modern politics and specific figures like Donald Trump and for this reason, Animal Farm not only appeals to those interested in history but also those interested in the present state of politics.

Visual Treatment and rationale
I utilise three different design styles in my project. The first design style is in response to the theme of Animal Farm which tells the story of the Russian revolution through metaphor. It explores themes of communism, revolution and corruption of power in the context of modernist Soviet Russia. The style of art used in Russia to promote these ideas was Russian constructivism, so I took this propaganda style and created animated posters using constructivist design principles. The colour palette of red, black and white was used for these propaganda elements as well as clean geometric shapes and bold typography.
The second design style references the medium of Orwell’s novel which is classic literature. I utilised traditional book illustration styles popular in the late 18th century to early 19th century. This style involves fine linework drawings with strokes or crosshatches to suggest depth with watercolour paint to add colour.
This style was slightly outdated by the time of Animal Farm’s publication as art and design was moving from figurative to a more abstract style. The merging of this traditional book illustration and the more modern abstract constructivism represents this change and sets the mood of unease and transition which reflects the narrative.
The third design style is like that you see in atmospheric and gothic style animations like the work of Jamie Caliri who created the end credits of A Series of Unfortunate Events. Caliri also makes use of vintage-style illustrations and 2.5d space to create an almost theatrical set-up for his grungy illustrations. I also used the 2.5D space and paper cut out style illusion to mimic this effect with the addition of harsh spotlights as well as weather atmosphere like rain and lightning. 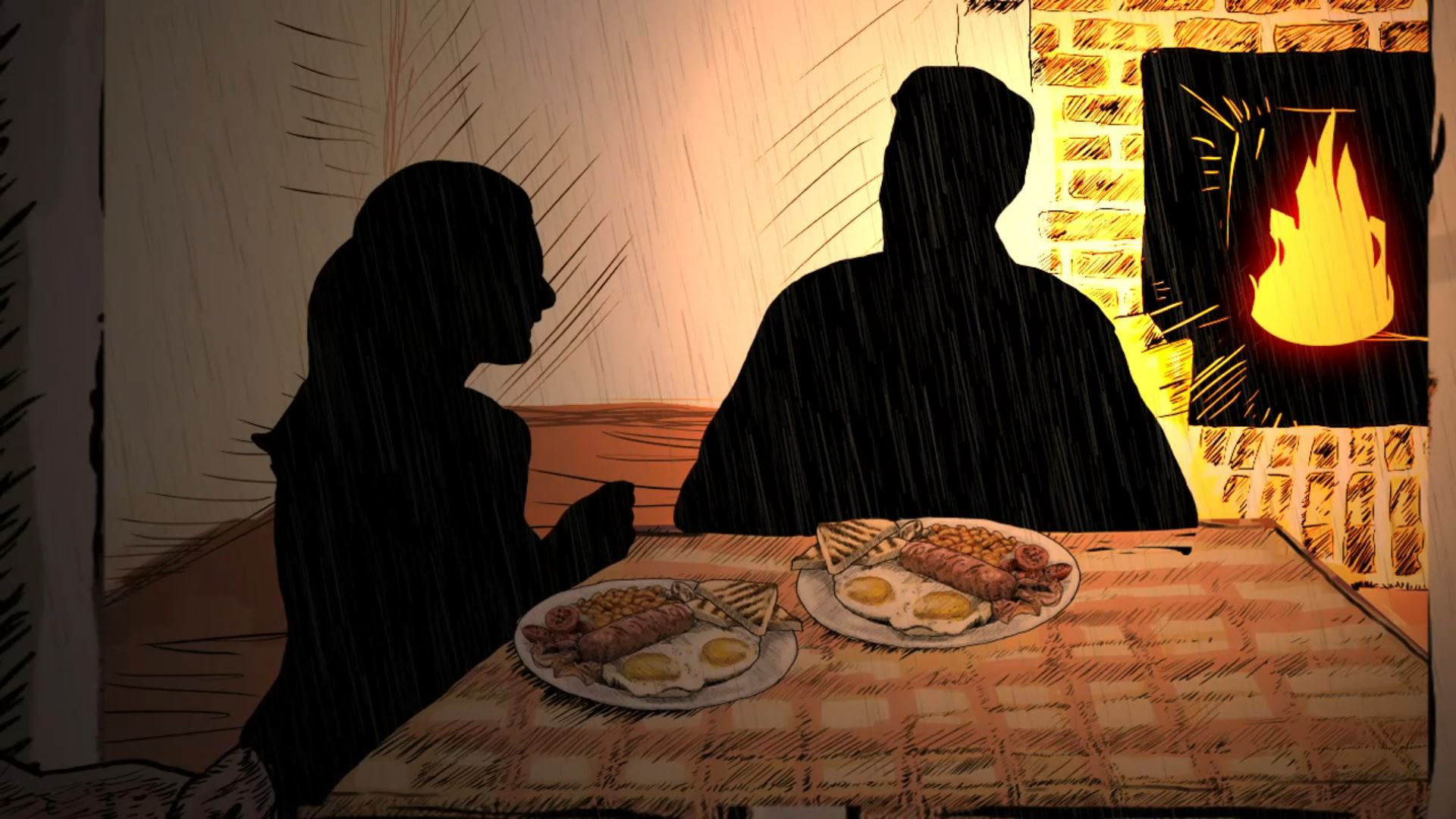 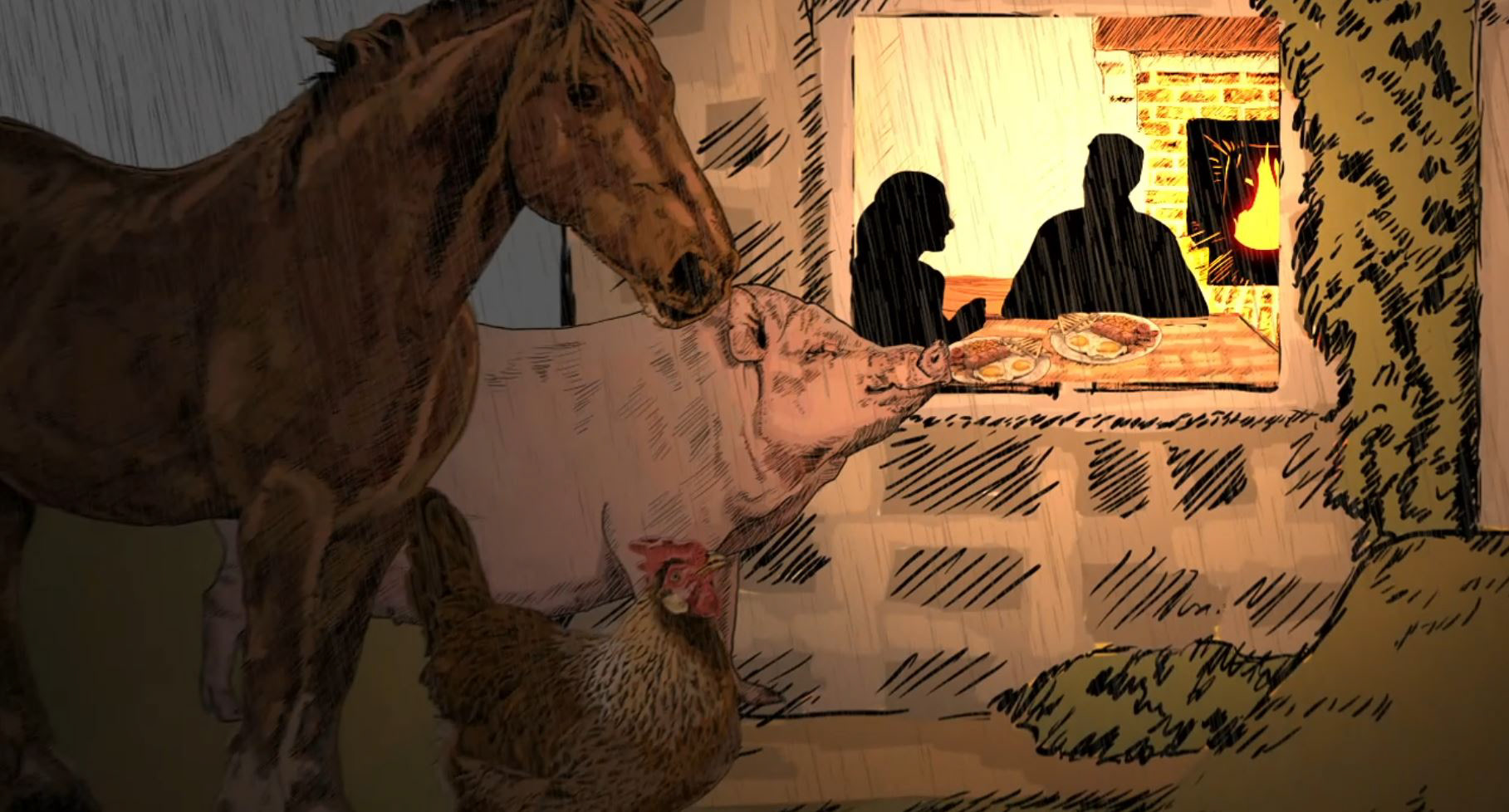 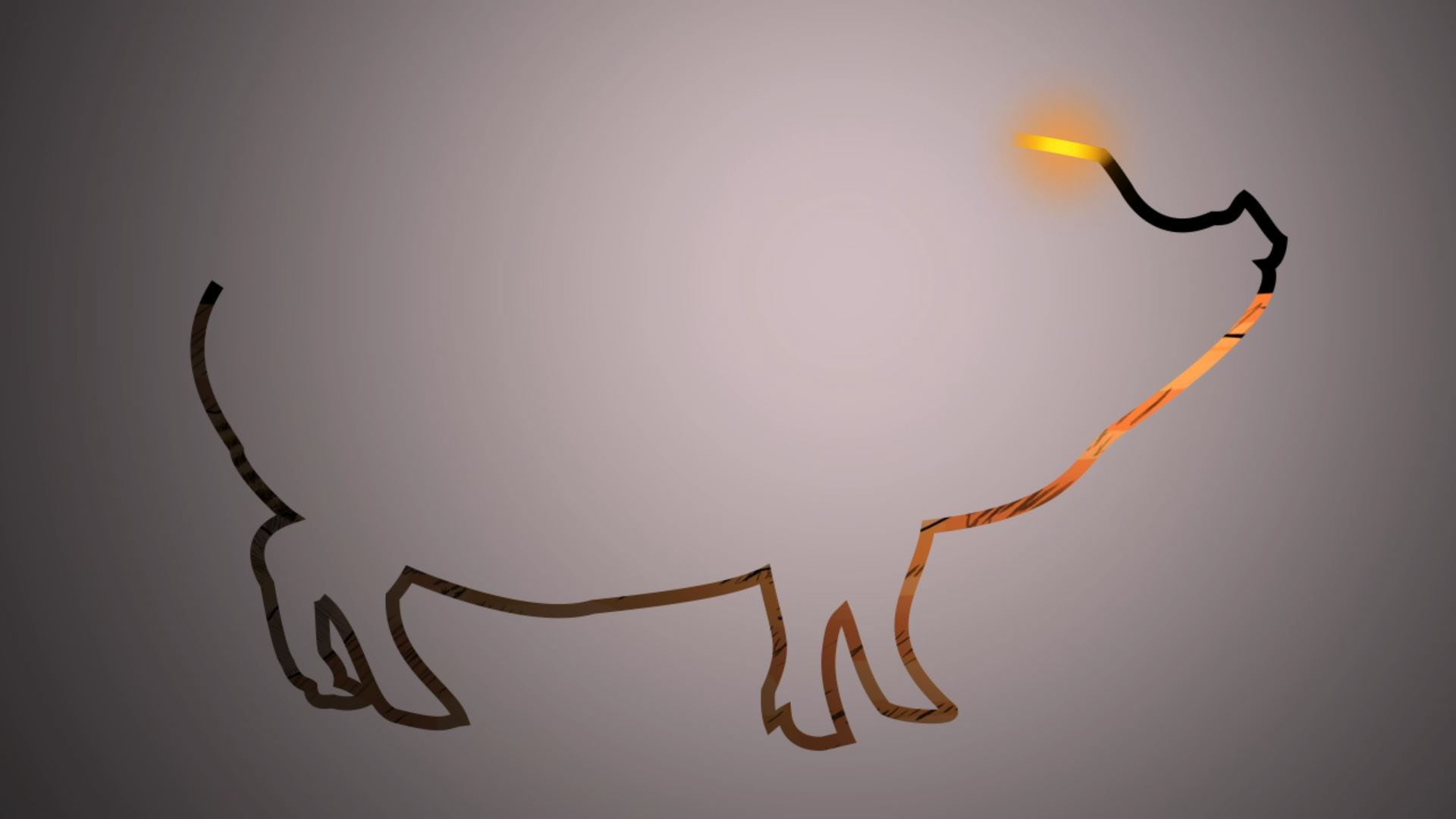 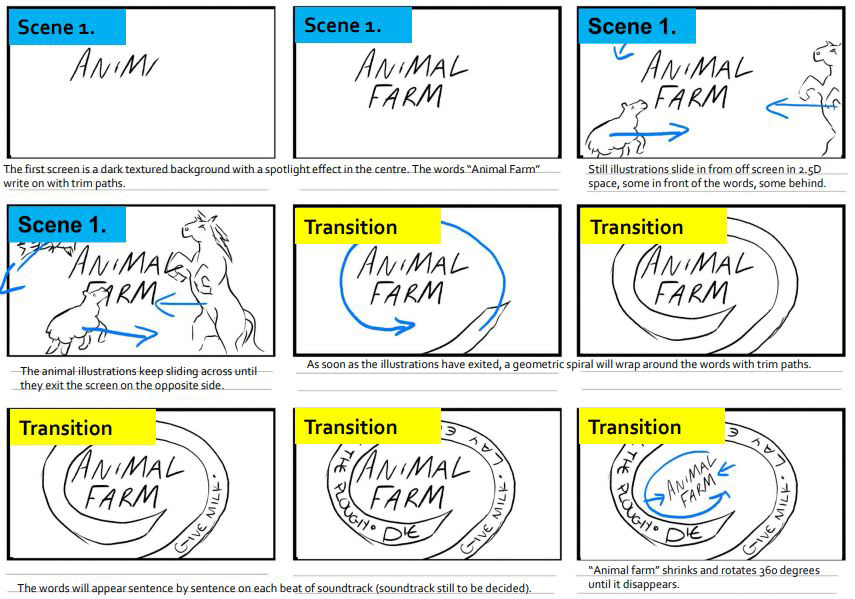 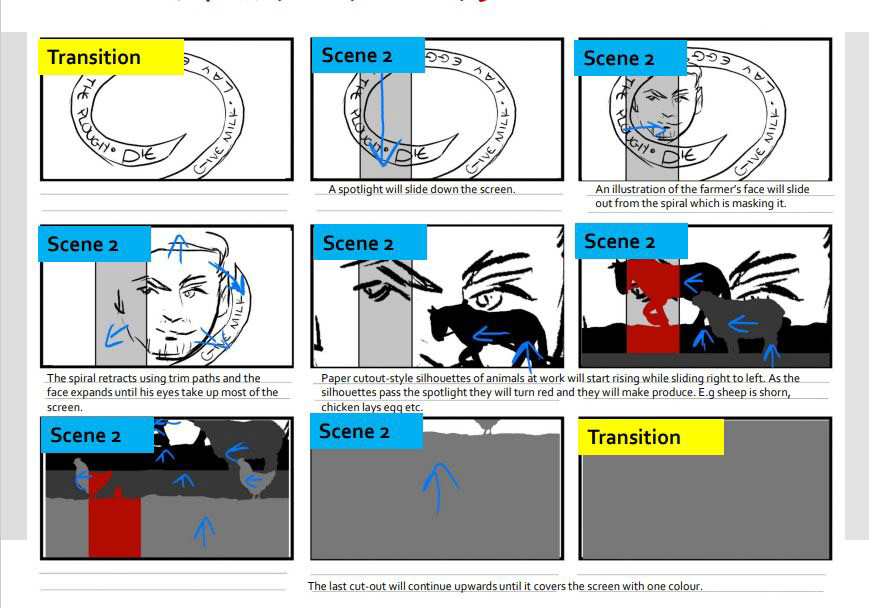 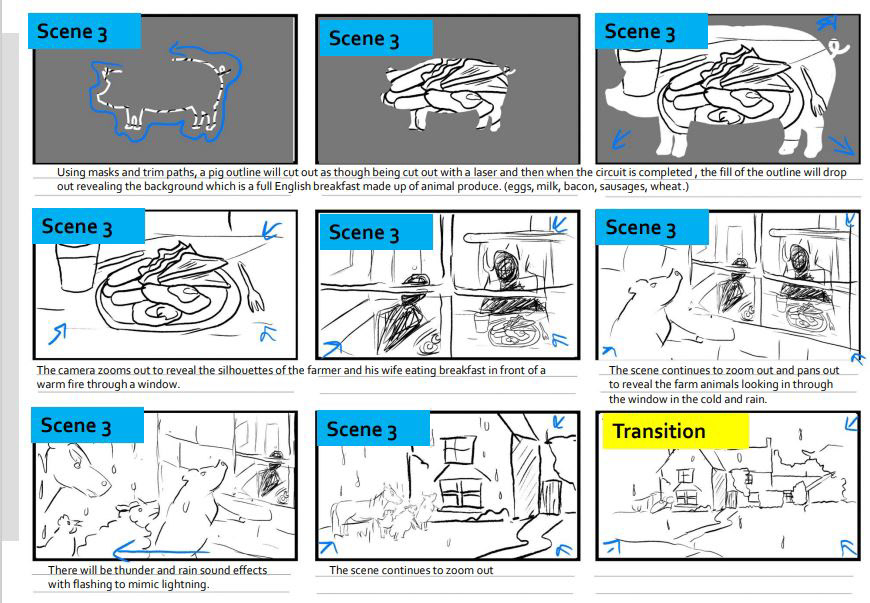 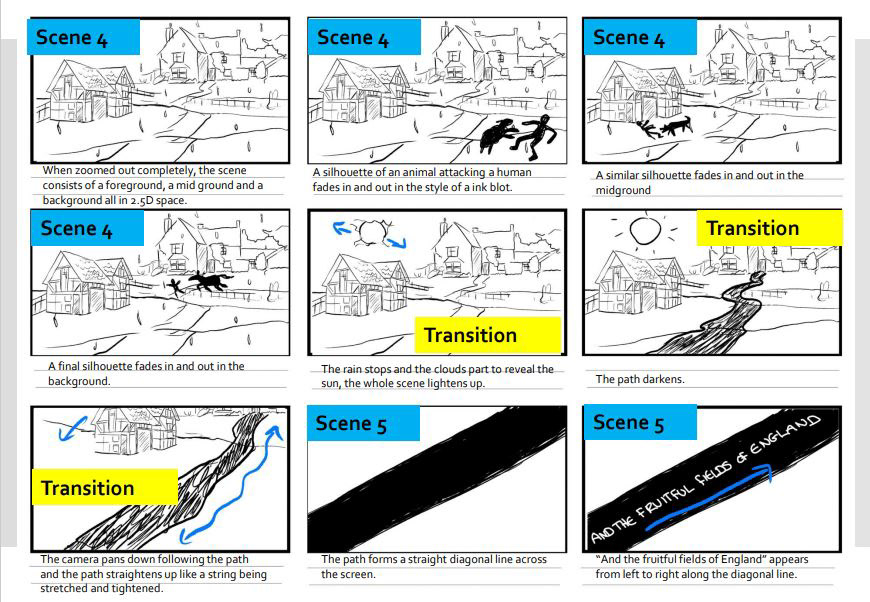 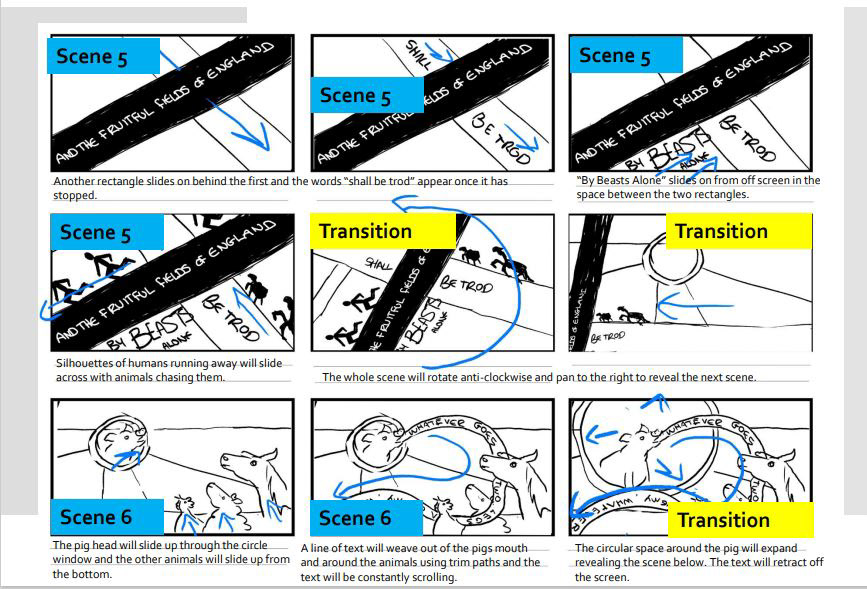 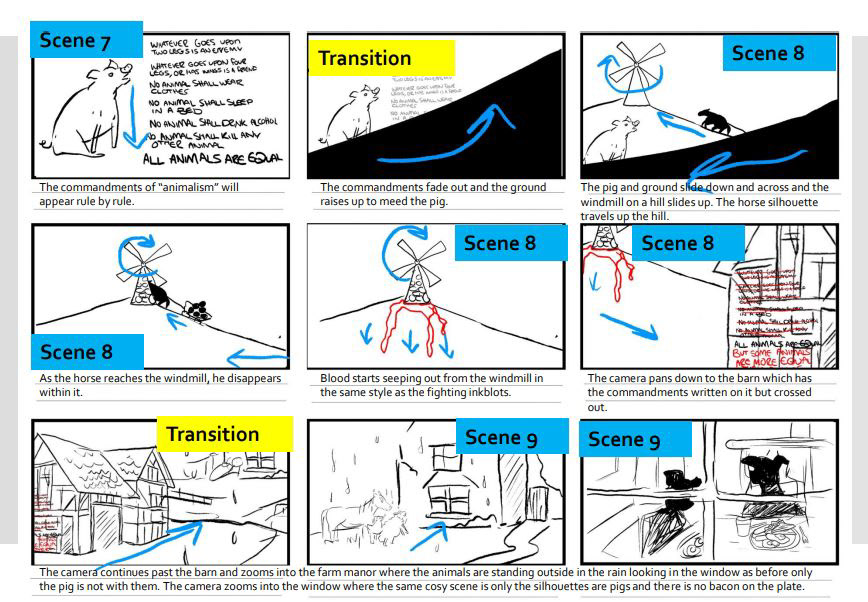 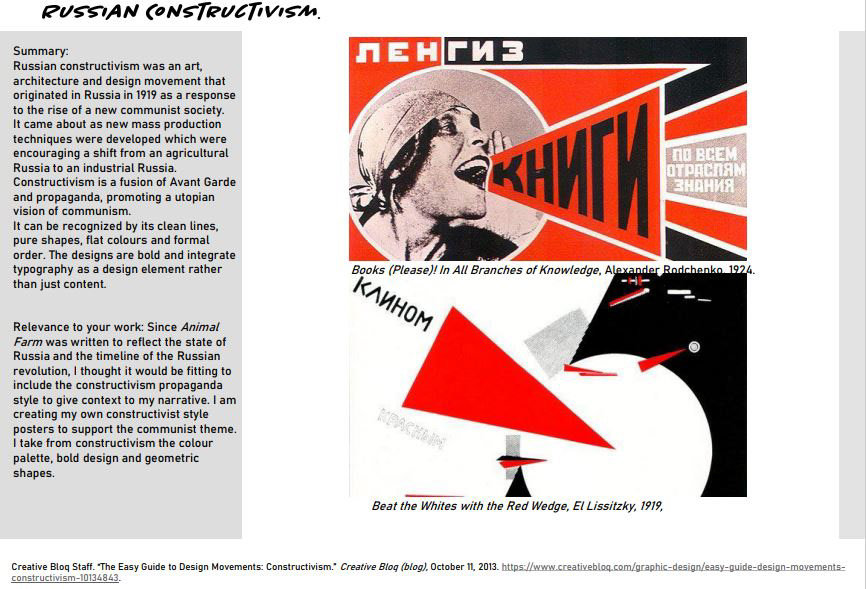 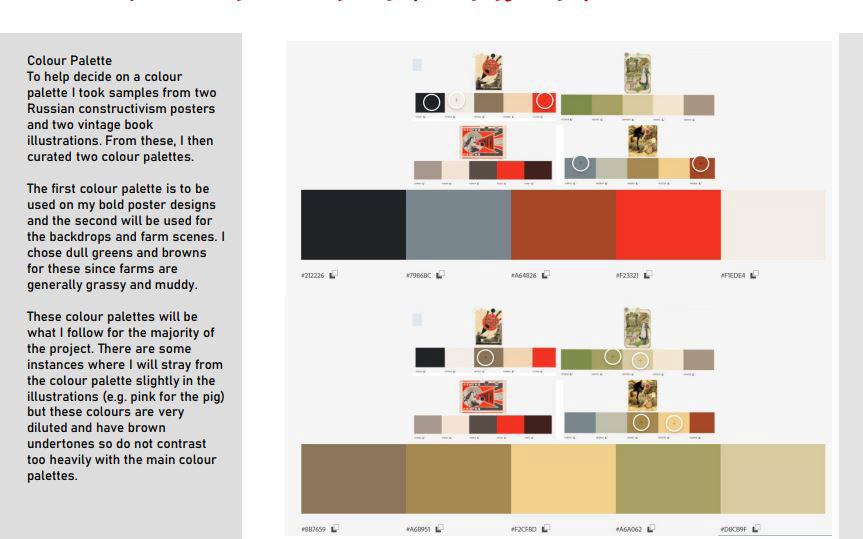 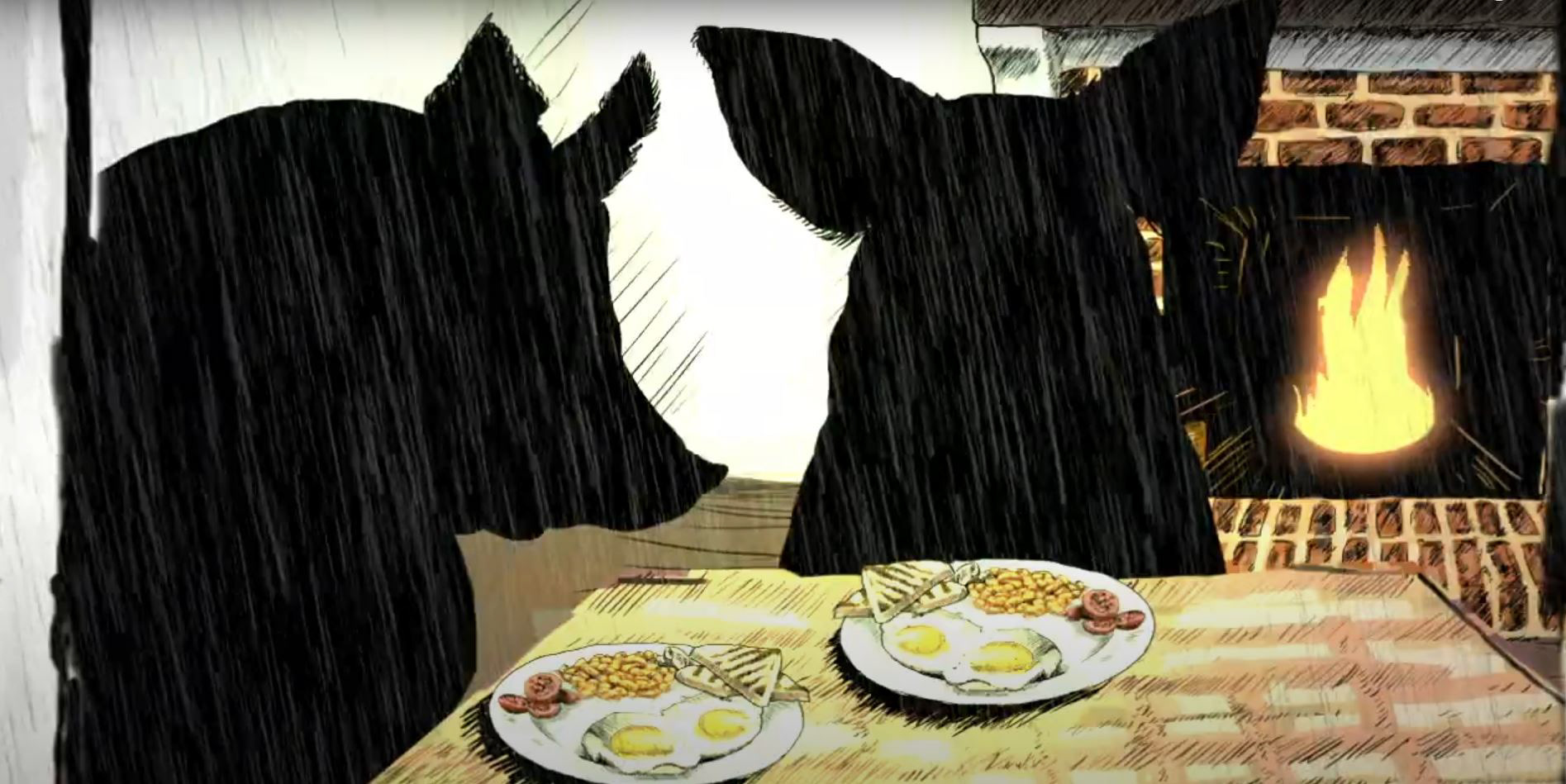 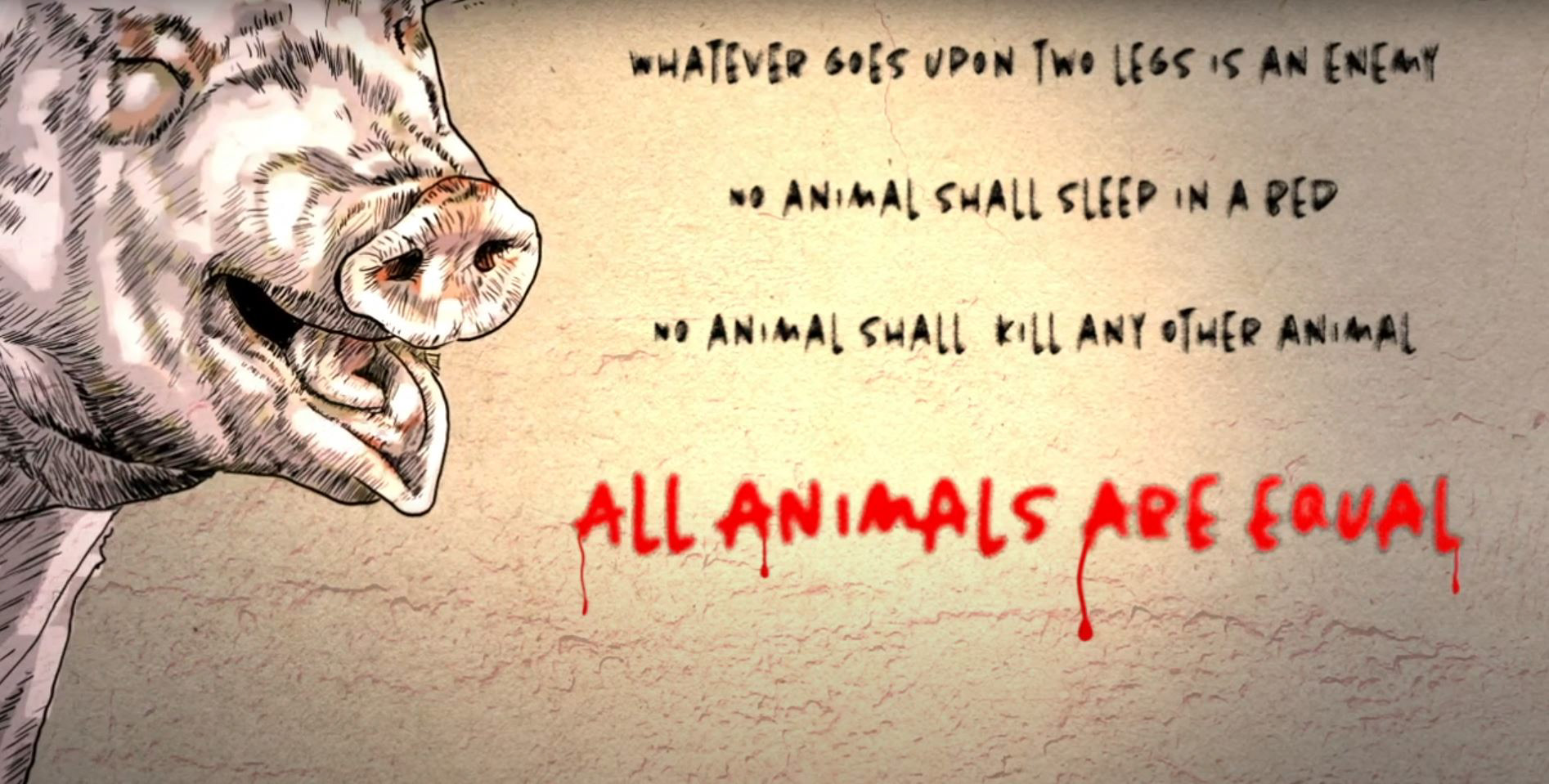 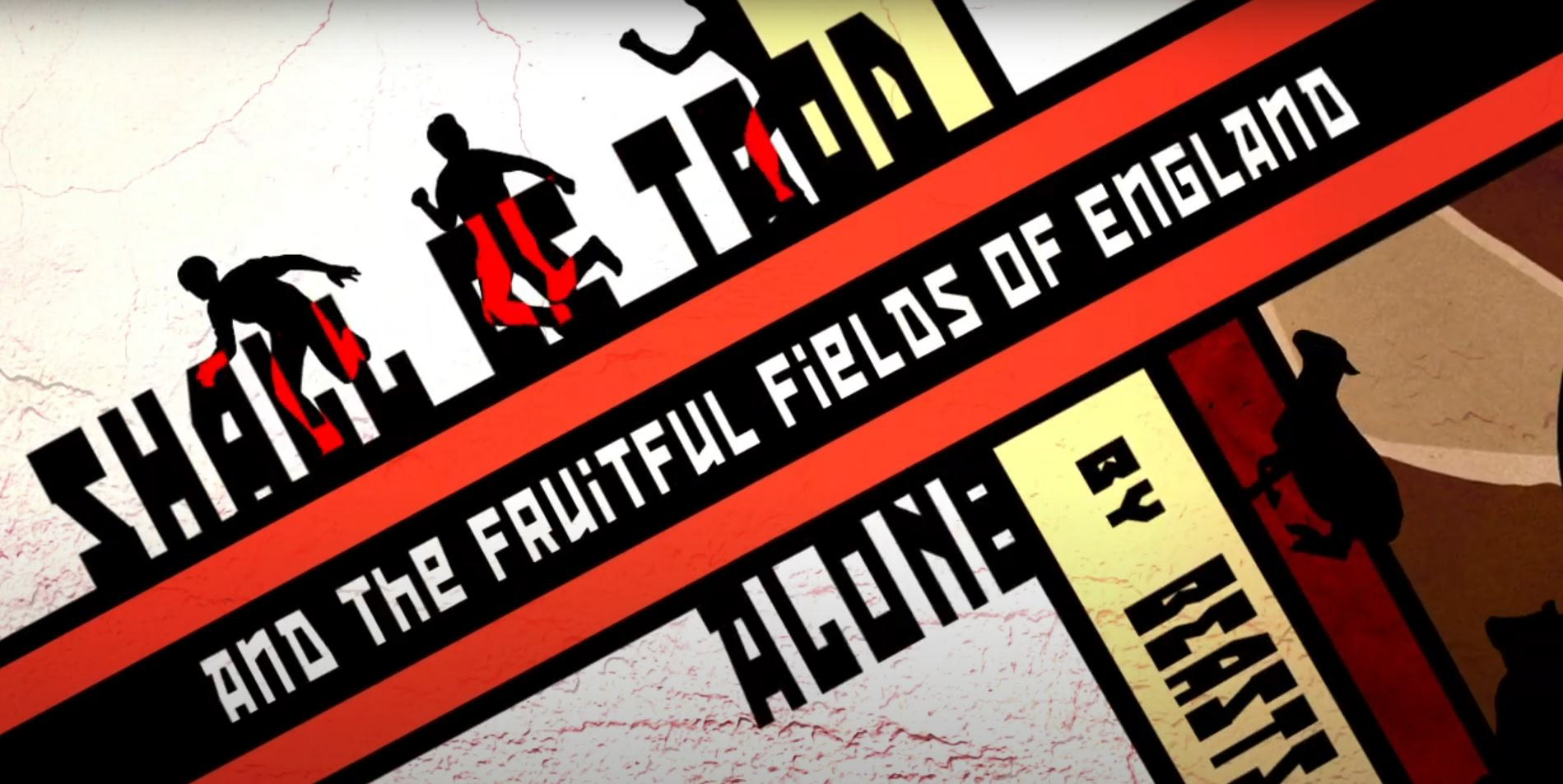 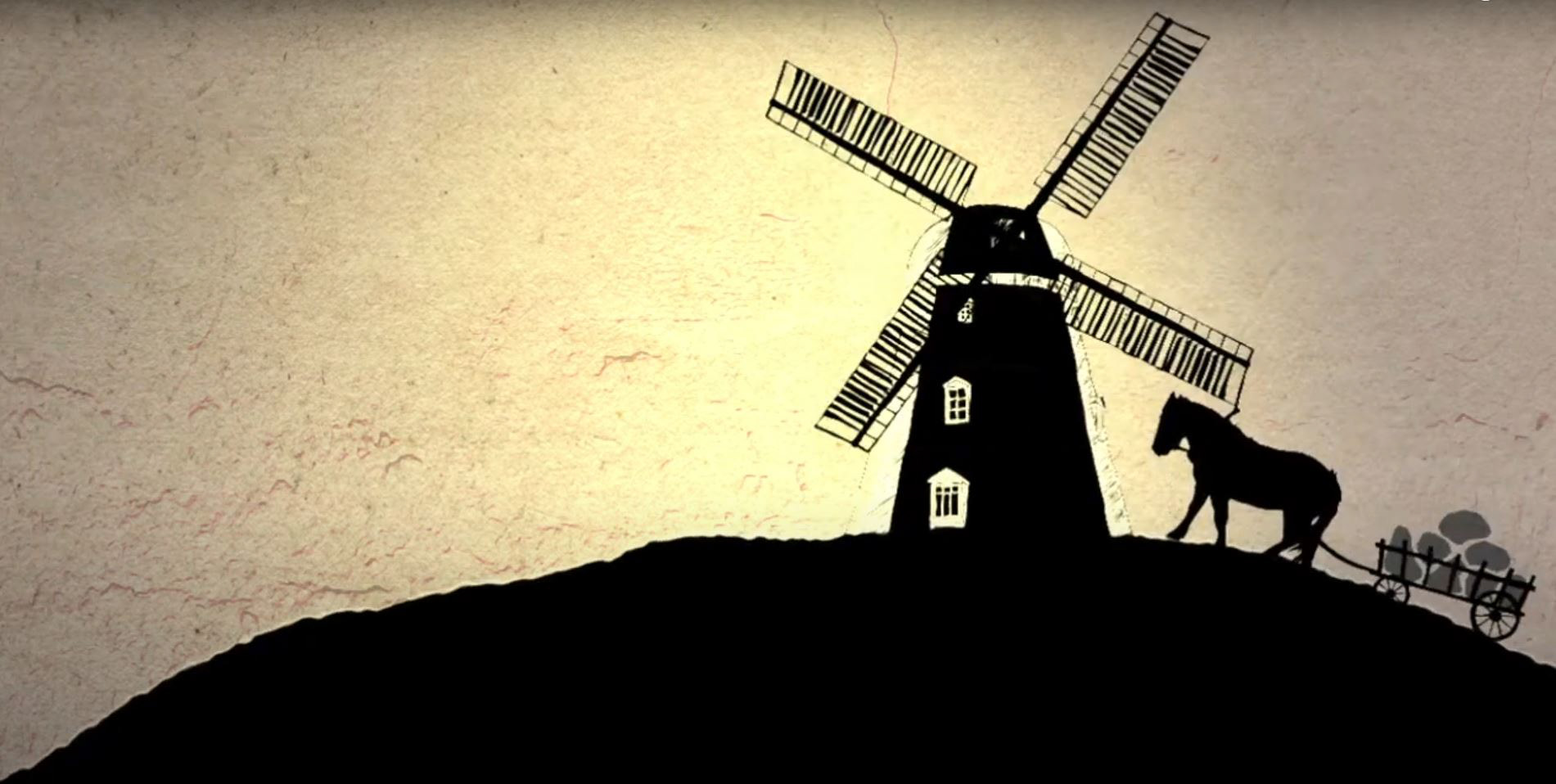 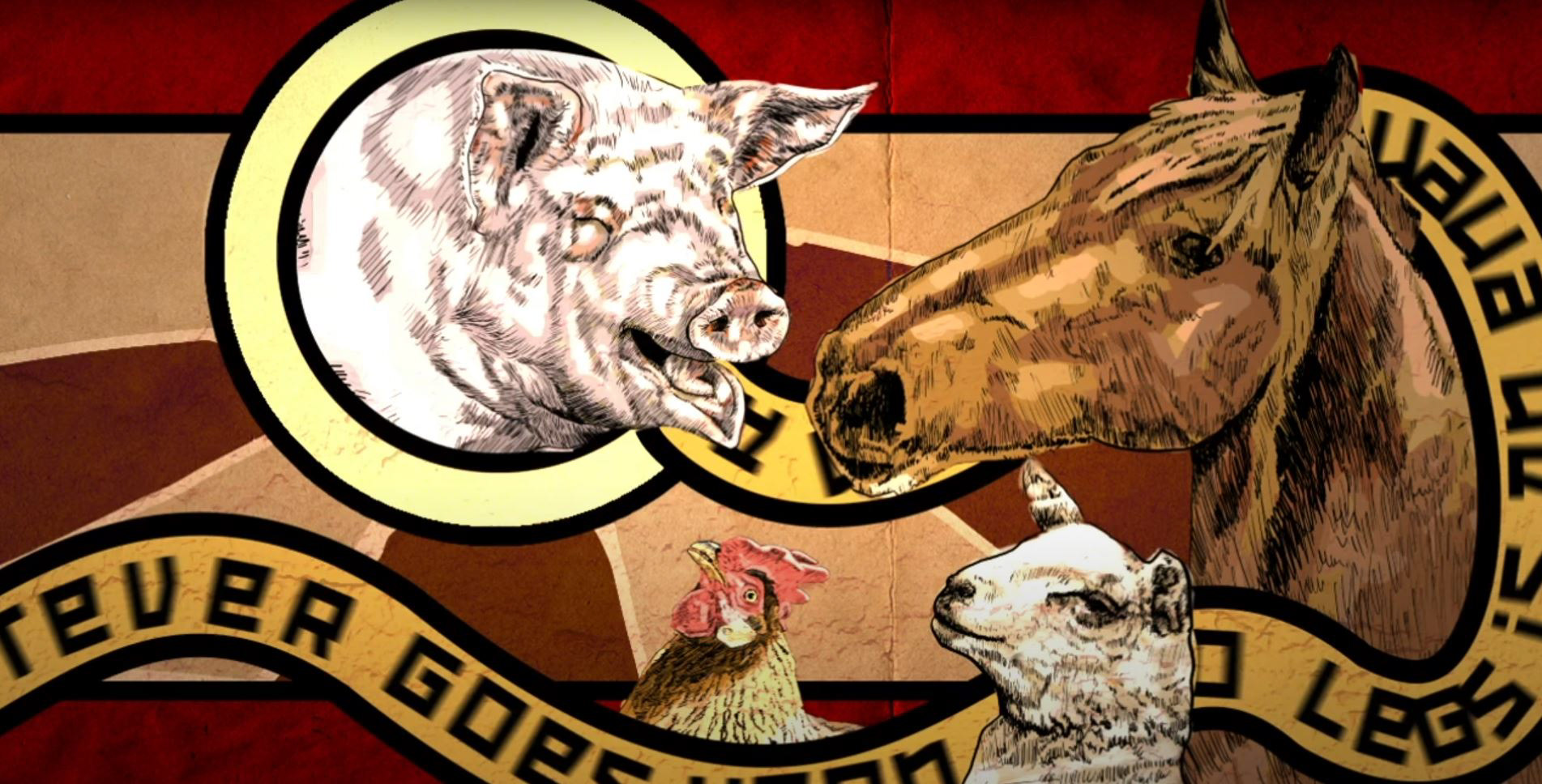